My Interview with CEO Rick Thompson

First of all, I just finished my interview with CEO Rick and the ole Bosses are swarming me like bees wanting to know how it went. I swear it’s just like my mom questioning me after my first prom. “How’d it go? What’d you say? What’d he say?”

Before CEO Rick showed up, James and Chad kept looking out the window, and anytime any of us would get up to go to the bathroom, they’d jolt their heads up to see if CEO Rick had arrived. Okay, actually I was doing the same thing.

Once CEO Rick arrived, he and the ole Bosses had a long meeting in James’ office in which James and Chad probably tried to explain why there was a random girl in the office reading Glamour Magazine. “We realize it makes no sense, Rick, and no, she doesn’t make herself useful while she’s here. We just don’t know what else to do with her.”

After that, CEO Rick sat us all down and explained how great the company is doing. He had lots of charts and numbers and graphs and slides, and I for one made sure to nod vigorously at every single point he made. And when he spoke of trends and goals, I’d just squint and nod knowingly like, “Yeah Rick, I get you.”

Then, it was time for me to sit down one-on-one with CEO Rick. We stepped into the conference room, and Rick kindly let me ask him whatever I wished. . .

An Interview with Rick Thompson, CEO of Envoy Mortgage

Just the Assistant: First things first, Rick. Are you nervous about getting to meet me?

JTA: It’s okay. A lot of people feel that way. So, how did you become CEO?

CEO Rick: I wrote the biggest check to invest in the company.

[Note: I wonder if he’d like to become the CEO of Just the Assistant?]

JTA: Is anybody afraid of you since you’re the CEO?

CEO Rick: I hope not. I really hope not.

JTA: You don’t seem scary. How do you make huge company decisions?

CEO Rick: I talk to the smart people around the company and see what they think. Somebody told me once that I’m never going to be as smart as the collective intelligence of 500 loan officers, and I think that’s true.

JTA: What does a typical workday look like for you?

CEO Rick: Lots of meetings, and just like everybody else, too  much e-mail. And I travel – over the next few months I’m going to be visiting all of our branches.

JTA: Wow! Speaking of branches, who is your favorite branch?

JTA: What do you eat for lunch?

CEO Rick: An orange and a cup of coffee.

JTA: Yikes! Do you eat breakfast?

CEO Rick: Yes, I have egg beaters and yogurt.

JTA: Do you work out? You look like you work out. (Instantly, I regret this question because  it looks like flirting.)

CEO Rick (being the gentleman he is, scoots his chair away at my inadvertent advances): I try to walk every day. But that’s about it.

[Note: At this point, I should have abandoned my pre-written questions. I did not. I’m embarrassed to say that my next question was]:

JTA: What do you wear on weekends?

JTA (I started sweating at this point): Do you have any pets?

CEO Rick: I have a dog, a toy poodle. Do you want him?

[Note: Apparently Rick hasn’t heard of how fabulous my own dog, Cowboy Ledbetter is. Really, he should check my Facebook page more often.]

JTA: Nope! But speaking of fun things, don’t you think there is a missing component of the Circle of Excellence trips? Like, a blogger to report on what happens behind the scenes?

CEO Rick (laughing): I knew there was something we’ve been missing!

JTA: You think about that, Rick. Now, what would you like people to know about Envoy Mortgage?

CEO Rick: We always try to do the right thing. We may miss it sometimes but it’s not because we tried. If we do something wrong and we know about it, we’re going to make it right.

[Note: this is true. I’ve been around this company for a while now, and they really do try to do the right thing all the time. Okay, I’ll let Rick take it from here. . . ]

Great people work at Envoy. We have high expectations for our people. We expect them to be great, and if you have those expectations about people, you know what happens? They tend to fulfill them.

We are growing a great company and that’s an exciting thing for me—and I hope—for everyone in the Company. It’s a growth story where we’re all challenged to do the right thing all the time; grow ourselves, grow our capabilities, grow our Company.  When we see failures in industry and for people in life, it comes down to failures in character. People fail when their underlying values fail to point them in the right direction, or when they ignore what their values tell them and go in the direction of their self-interest.

At Envoy, we don’t duck the hard choices and we don’t kid ourselves about the business.  It’s a fun business but a hard one in many respects.  It requires that we be consistently and scrupulously honest with ourselves about everything:  our people, our performance, what’s happening in the market, and what lies ahead, which is always volatile because of the nature of the business.  How exciting!  And if we work hard enough, and are honest enough and committed enough to our craft, we have a great chance to out-perform the competition and grow.  What more could you want? 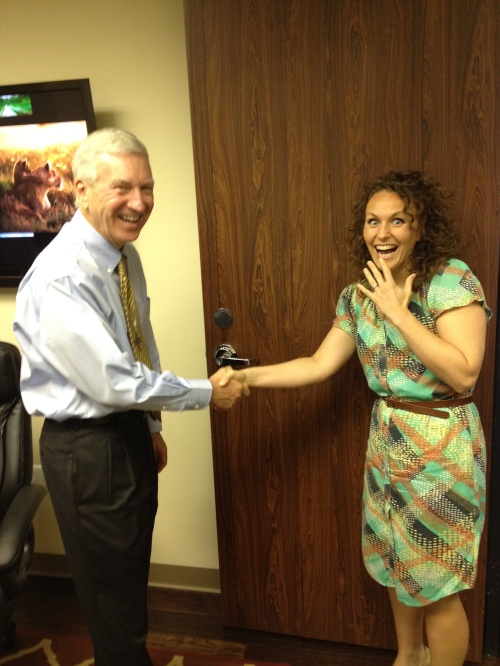 CEO Rick Thompson and Just the Assistant seal the deal.

I’m telling you, if they hadn’t already made this guy CEO, I would’ve recommended it.

Thanks so much to Rick for allowing me to interview him. I think it speaks volumes about our company that the CEO was willing to sit down with the absolute least important person in the industry (and possibly the state of Texas) and answer questions for this little blog. He even e-mailed later to say it “was a pleasure” to meet me!

Mr. Thompson, the pleasure was all mine.