You Won’t Manipulate THIS Just the Assistant

My devotion to the ole Bosses has been tested in the past few weeks. “Did James try to flowchart you to death? Did Chad schedule a bacon eating competition in the conference room?” you ask? No, dear readers, the Bosses have done nothing wrong. Here’s the thing.

As I mentioned last week (and by the way, those of you who are email subscribers only got to see half of my post because of technical failures and the stupid Internet) I am moving. This upcoming move is the product of some negotiations though. It started when the builder casually said, “I don’t know if you already have a lender or not…”

Do I have a lender? Ha! I jumped in and told him that, oh yes, I had a lender alright. And that’s when he mentioned that if I used my own lender instead of their “preferred lender” (read: lender who won’t do as good of a job as James and Chad and will totally screw up my loan and close it seventeen days late), I’d need to give them forty thousand dollars in order to secure the lot upon which I’d like my house built.

Did you hear that?

Just to use my own lender. Granted, this forty thousand would eventually be put towards my purchase price, but I won’t actually be purchasing this house until May or so, when it’s complete. But they wanted those forty thousand smackers today.

That’s when I had to ask myself, “How much do I love the ole Bosses?” I write about how devoted I am all the time, but was I willing to dole out my entire life savings to be tied up for 8 months just so I could secure a loan with James and Chad instead of the slimy Big Box Bank? What if I stubbed my toe between now and May? I wouldn’t even be able to afford band-aids! What if I got hungry? Food would be out of the question for sure.

And keep in mind, I don’t get any special deals with my Bosses. Working on a loan for me requires just as much work for them as it does when they work on your loan. So I pay for my appraisals just like you do, I pay closing costs just like you do. What I’m saying is, I’ve used James and Chad for all my home loans because they actually are the best mortgage bankers in this state.

I called James and told him about the tricky tactics of the builder. “They want forty thousand dollars from me if I use you, ole Boss.”

James told me to do what’s best for me, that he would be fine. Why’d he have to be so nice about it!? It made things even harder. I knew using another lender would mean problems arising throughout the loan, and I knew that while James and Chad are honest with all their clients, other lenders are not.

And this is where my real estate agent came into play. As I’ve mentioned before, you need to use a reputable real estate agent. Why? Real estate agents are like a free service! And if they’re all free, why would you go with a shoddy one? I know they get paid, but the seller pays for them, so you just worry about finding a darn good one.

My real estate agent looked over the contract. “Forty thousand dollars to secure the lot if you use your own lender? That’s ridiculous.” And then she got to work.

That night I got the call. My real estate agent told the builder (or rather, the builder’s agent) that we’d be using our own lender, and that we would put down ten thousand dollars. Anything else would be a deal killer.

I’ll let the texts tell you the rest… 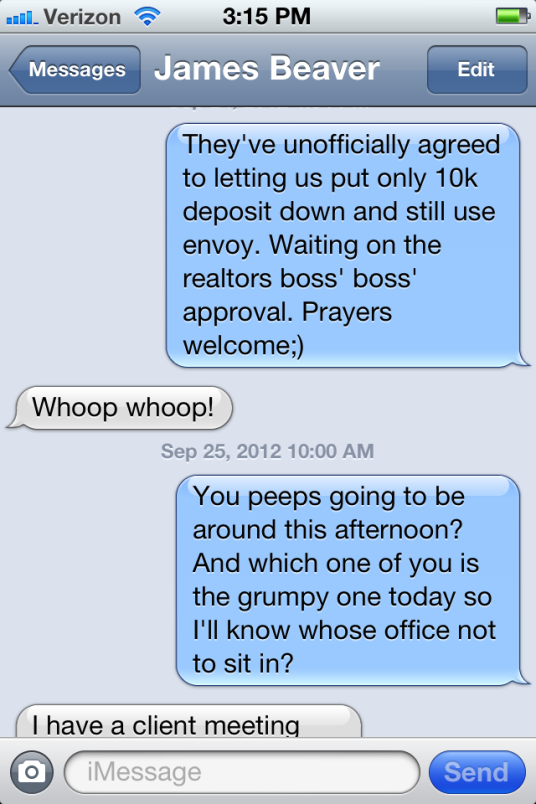 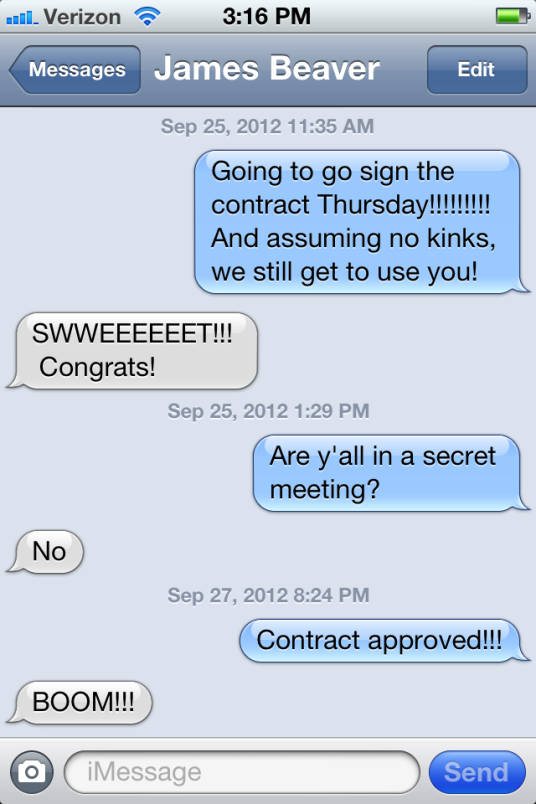 So if you find yourself in this same position, ask your realtor to negotiate the heck out of that thing for you. After that, let’s you and I go shopping for entryway tables together.

And since I can officially still afford them, off to buy groceries!

2 thoughts on “You Won’t Manipulate THIS Just the Assistant”