I came in the office today and walked directly over to Online Dater Jason to inquire about his love life. Instead of finding a smiling, noisy Jason like usual, I found a gloomy Jason all hunched over his desk wearing a visor and glasses (he doesn’t wear glasses). Here’s the thing. Jason woke up in the middle of the night with his allergies going haywire and eyes itching galore. Two hours later he woke again, scratching at his eyes like a wildcat. And this morning when he finally got up, the guy was nearly blind. “Jason,” I said, “I think our readers need to know what you’re going through.”

“You above sympathy loans?” I offered. 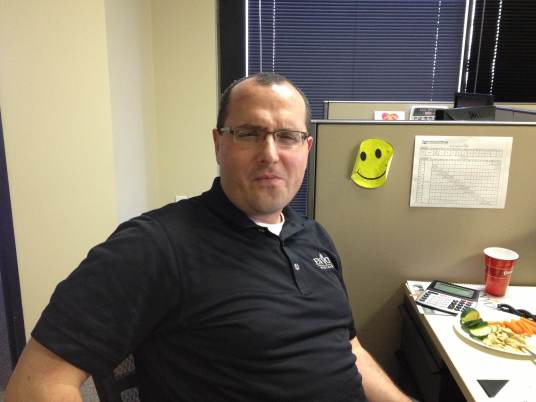 Not above sympathy loans, after all.

That got me thinking, maybe I could play up everybody’s ailments here. I passed Hottest Mortgage Banker in Texas Hayley’s cube. “Got any ailments?”

She thought for a while, and then lit up. “I bumped my hand on the door!” 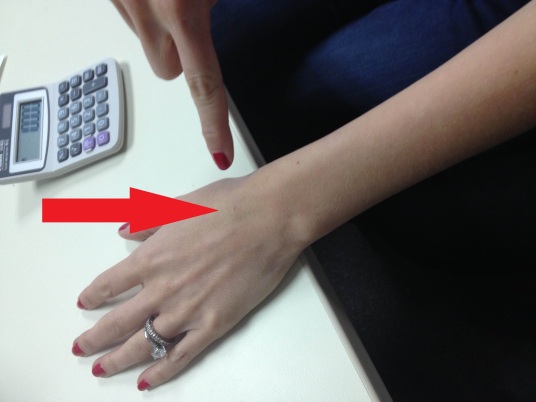 After seeing the attention everyone else was getting, V-Shaped Mortgage Banker Will offered to drum up a flesh wound by smashing his head into his desk.

Okay, y’all, I’m not even kidding about this next part. As I was prancing around the office asking people for their ailments – “Anybody got any bursitis?” – the ole Boss James walked in. He’d been at the doctor. An orthopedic surgeon. And he was wearing this giant leg cast! I may have physically pushed Jason to the side when I saw James’ ailment. “Sorry Jason. You just got upstaged, buddy.”

Thankfully, James isn’t above trying to score a few sympathy mortgages either. 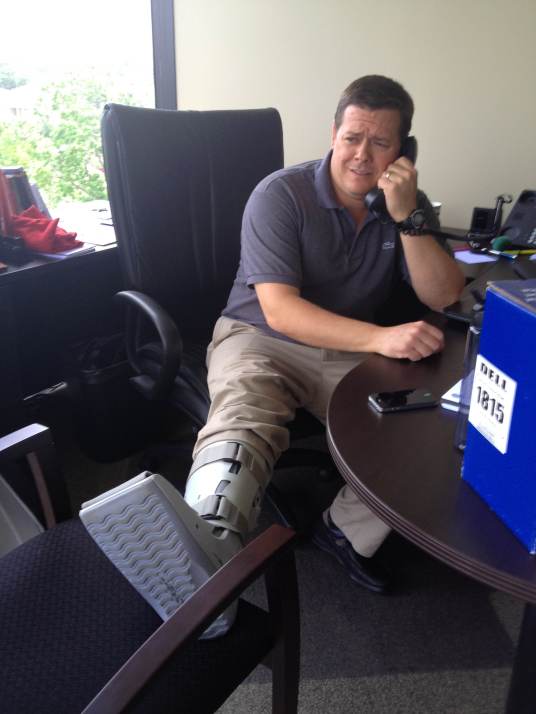 Turns out, James has been experiencing mystery foot pain that resembles, as he says, “someone shoving a knitting needle into my ankle.” (I’ve not had that experience so I’m not sure what’s going on with the ole feet.) He’ll be in the boot for three weeks, and after that, well, we really don’t know. I’ll keep you posted.

What the heck is going on? Y’all, I know I stretch stuff here, but I am not making this up. Just So John just showed up. Half his face is swollen – he just had a tooth pulled! He said the dentist offered him laughing gas for $130 but he said he’d rather buy a new mermaid shirt with that money because it’d make him happier in the long run.

Here’s John demonstrating how he can slap his face and not even feel it.

Jason is back from the optometrist. Poor guy has an ulcer. On his eyeball. Caused from contacts or something.

It’s official. Jason wins. Jason has the worst ailments. Send him the loans.

Okay readers,  please remember to tune in to 700AM in Houston tomorrow evening at 6:00 and listen for my breathing in the background of the finance show (because that’s cool, right? Listening to AM radio on Friday nights?).

Now, I’m out of here before one of my co-workers drops dead. Have a great weekend!