“What the blank you gonna do about it!?”

Y’all, I saw a fight in the Kroger parking lot on 11th this weekend. No joke. This man was positioned at the gas tanks and had pulled up so closely to the car in front of him that the noses of the vehicles were touching. So the lady who owned the other car was like, “Sir you need to move your car. You’re too close.”

Dude ignored her though. And she’s like, “Sir, MOVE YOUR CAR!”

And you know what the guy did next? He started motioning his hand like you would if you were imitating someone talking, or like imitating a duck quacking.

The lady lost it. She marched over to the guy and slammed his gas tank shut and shoved him. So he was like, “Get your hands off me!” and she was like, “WHAT THE F%&K YOU GONNA DO ABOUT IT?!” And then they start slapping each other! And the guy is all like, “I didn’t hit your f$*%ing car!”

By this point all of the onlookers were way beyond pretending not to watch. If you start a slap fight in the middle of the Kroger parking lot, all norms are off. This old man came up and was like, “You did TOO hit her car and I saw it!” pointing at the touching cars. Then an older lady walked over with her hands up trying to calm everyone down. There was no calming down though. I kept yelling, “Oh my gosh! Oh my GOSH!” to my husband. (Quite helpful in a tense situation, I am.)

Finally, some 19-year-old wearing a Kroger apron and long hair sauntered over. He mumbled something incoherently and the woman stopped slapping the man and went back to her own car. I’m telling you, you get a Kroger apron and all of a sudden people pay attention to you. The whole way home I kept saying to my husband (who had been filling up our tank and hid behind the car when the brawl broke out), “Can you believe that? That lady was all ‘WHAT THE BLANK YOU GONNA DO ABOUT IT!?’ Oh my gosh that was crazy! Oh my gosh can you believe that!?”

Unfortunately my husband refused to drive back to Kroger to let me see what unfolded after the fighters finished filling up their tanks, claiming he didn’t want to have to testify in court (which I personally think would have been totally cool), so I didn’t see the ending. Too bad, because it would have been some good eavesdropping.

I just overheard Nametag-Wearing Richard on the phone inviting someone to an open house where he’s going to be making waffles and serving champagne. (It’s for realtors, so if you’re a realtor and want some waffles, contact Richard.)

After he hung up I pounced. “Richard, that’s so cool! Should we go practice?” 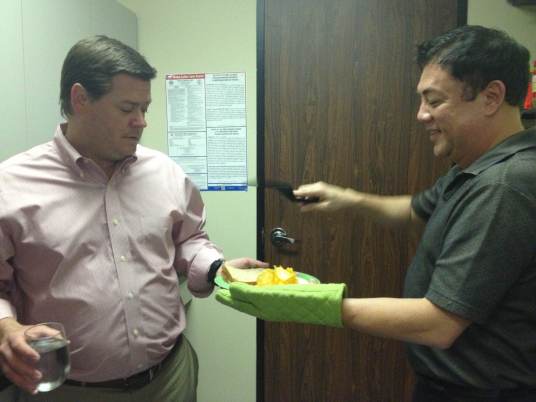 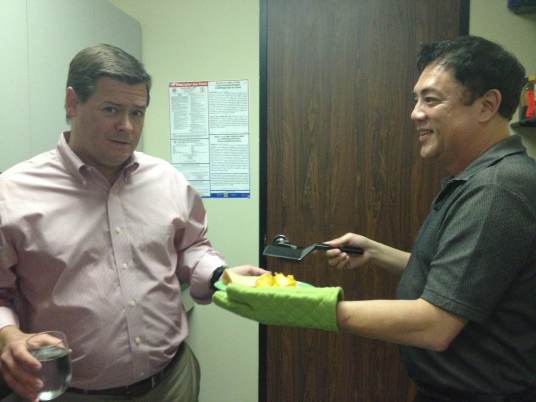 Straight-Shooter Shane overheard us chatting. “I’m smoking brisket and drinking beer in my backyard this weekend. Why don’t you write about me?” 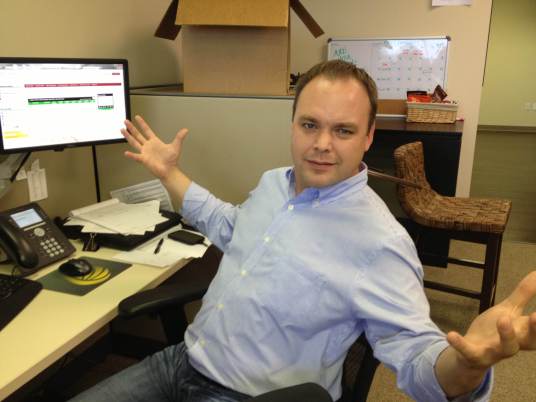 He’s got a point. If you’d like to drink beer with Straight-Shooter Shane in his back yard, contact him. Eager to please here at Envoy Mortgage, I tell ya.

Alright folks, I’m out to purchase a Kroger apron so that people will take me seriously. I may pick one up for Shane too so that you’ll all respect him while he serves you backyard beer and brisket, and another for Richard and his waffles. If they don’t like it I can be all, “What the blank you gonna do about it!?” And if y’all want to testify against me in court afterward, trust me, I’ll be cool with it.