I Almost Died on the Banana Boat

I’ve been in Florida for the past week. That’s why I posted a rant last week instead of any juicy mortgage gossip. Before we move on to the enthralling world of this office, I need to share with you the near-death experience I endured while at the seashore.

It started twenty years ago. My family has been going to the same beach in Florida since 1987, and sometime in the early nineties I started noticing banana boat rides taking off from the beach. The crew set up a little stand right outside our condo and hour after hour, year after year I watched laughing beachgoers taking off, straddling the giant inflatable banana, pulled by a tanned jet ski driver.

Last week, I decided it was time. My husband and I, along with our friends Annie and Anthony, were lazing on the beach outside the same condo I grew up vacationing in, when I announced, “I really want to ride that banana boat.”

The others looked over and casually agreed. We trudged through the sand to the little stand and asked the lady holding a clipboard and with a banana tattooed onto her back (I’m not even kidding, y’all), where we sign up. After signing away our rights and paying lots of money, and after securing some rather flimsy life jacket-type things that were actually more like what I’d call “life scarves,” we were ready to go.

A man resembling Fabio pulled up to the shoreline with his jet ski. We passed him a tip and asked for a great ride. I think I may have even winked. Fabio told us, “I can’t hear you once we get going, so the only thing I understand is thumbs up to go faster or thumbs down to go slower.” With the tutorial over, the banana-tattooed lady shouted for us to “jump on the banana, quick!” And that’s the last thing I remember before being jolted into the raging sea. Y’all, I know this doesn’t say much, as I’ve lived a rather charmed life, but it was the most terrifying moment of my life. Suddenly I felt my breakfast travel from wherever it had been residing in my body to my sternum. Then I became petrified by the realization that I could either hold on to the dinky handles of the banana, or hold my nose, but I could not do both, which was problematic since I knew I was about to fall off into the Gulf of Mexico.

And that’s why I began screaming like a mad woman, no, like a child, “I’VE GOT TO GET OFF! I CAN’T DO THIS! STOOOOOOOP!” Benson and Annie began frantically waving thumbs down gestures to Fabio who had apparently gotten a bit carried away with that ten-dollar tip. Finally Fabio caught a glance of the signals and slowed down. Once he pulled the reins on the jet ski he heard my shrieks and pulled up to us. “Ma’am, I have a piece of paper in my backpack that proves I’m a certified rescuer. Nobody has ever gotten hurt on my ride.”

First of all, I don’t even know what a “certified rescuer” is. It actually made me more scared, because I was like, “Why would you need to rescue me?” And second of all, there’s a first time for everything and just because nobody else had died on the banana boat didn’t mean that I couldn’t. I mean, hey, we went to the moon for the first time, right?

“It’s nothing against you, sir. I’m just very, very scared,” I panted. “I’m really sorry. I know you’re good at what you do,” I continued, clutching my chest and heaving. “Could you just, go a bit slower?”

Fabio assured me he’d slow down, and for the next ten minutes we puttered along through the ocean. Then Fabio turned around and said we’d be picking up another passenger. “Oh God, please let it be a child,” I prayed, knowing that Fabio wouldn’t kill us with a child on board. Turns out, it was a child, a very brave child. By this point all I could do was hold on and keep my head down and try not to cry as we sped through the sea, salt water splashing my face and listening to the laughter of the eight-year-old we picked up. 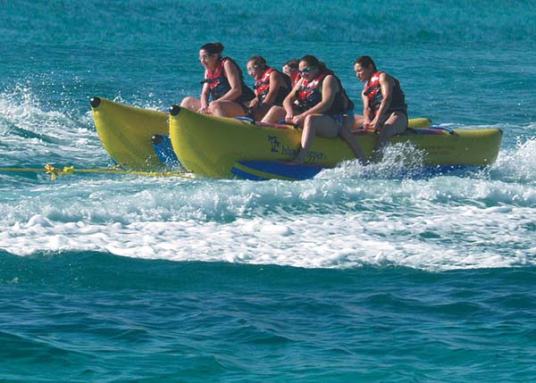 In the end, I lived. I’m still kind of in shock over the whole thing. It’s weird – I’ve been much closer to death before in my life (I’ve run from an avalanche (later to find out it was on a mountain beside the one I was hiking, but still), I’ve been in car crashes, and once thought a bear was charging me (turns out, someone was throwing rocks in the woods), but I’ve never been as terrified as my thirty-minute banana boat ride. I have to say, it’s good to be back on dry land.

Now that I’m back in the office, it’s time I properly introduce you all to our new guy, Britt. (I realize there’s no transition there, but I couldn’t think of a good one between “I almost died” and “meet our new guy.”) I’ll interview him tomorrow so that you can get to know him better, but for now here’s a taste: I have a business lunch tomorrow with an important world leader (not really but it’s someone more important than me, that’s for sure), and leaned over to tell Britt about it (I’ve been squatting in the cube next to his). But before I could tell him any details, he goes, “Need to know what to wear?”

“You wanting to know what to wear?”

“Uh, no. I just wanted to tell you about my lunch tomorrow. But, uh, what should I wear?”

“Wear a skirt. Something like you have on now, and wear your hair up; you’ve got pretty wild hair.”

Okay, you all stayed tuned to find out why Britt cares so much about fashion and why he’s going to be a really great mortgage banker, and I’m off to sue that lady with the banana tattoo.

5 thoughts on “I Almost Died on the Banana Boat”