I Kind of Lied

I kind of lied.

Here’s the thing. The ole Bosses bought the whole office these cool Just the Assistant t-shirts. A few weeks later we all wore them to a party (that you can read about here) and afterward, I posted the pictures to the blog. Well, the next day, a reader wrote me and asked how to get one. Did she need a mortgage? Nope. Does she live in Texas? Nuh uh. Is she really powerful and able to spread the word of my blog to millions? Not so much.

But here was this person that wanted a shirt with my blog scribbled across the boobs, and I had to make it happen. “Hey Bosses,” I wrote in an email. “A reader would like a JTA shirt. Would you guys pay for it?”

And they said yes! They’re so kind. “We can’t buy everyone a shirt, of course, but if the occasional reader asks for one, we’ll see what we can do,” they wrote.

But wait! To make up for my dishonesty, my cousin did something amazing with the shirt. She got professional pictures made wearing it. I am so incredibly tempted to leave the story at that and have you think I have a nutcase for a cousin who’s all the time hiring photographers to follow her around. So…

Hee hee! I can’t do this to her. Here’s what happened. My cuz was having some pictures made of her with her daughter and called me to discuss wardrobe options. (We’re deep, my cousin and I.) Just as we were grappling through the issue of whether navy and yellow really “go” together (they do), I said, “Hey, I’ve got it. Just wear the JTA shirt! Hahahahahahaha!” We both had a good laugh at that.

Now, do you want to know how awesome my cousin is? This awesome: 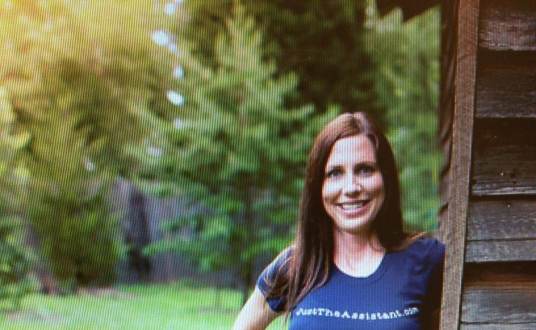 That girl wore my little blog’s shirt for the pictures! And she told the photographer all about me. (And seriously, the photographer was like, “It’s a blog about mortgages?” and totally thought my dear cousin was, in fact, a nutcase.)

Y’all I’ve got some crazy family members, but this gesture has renewed my faith in  many of them. Thank you, cousin!

Okay folks, you all enjoy your week and I’m off to Atlanta to meet the newest member of my crazy family (I have a new nephew – woop woop!) While there, I may or may not try to convince my brother to clothe the little one in JTA onesies.